Ken Grinde is a video editor and animator from the Flathead Valley. After graduating from Middlebury College in 2011 with a BA in Film, he spent five years in Los Angeles working as a director, cameraman, editor, educator, and drummer. He has taught video production, writing, and performance to students of all ages. Now based in Missoula, he produces live events with his band Writ Large and freelances as a videomaker. 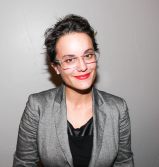 Charlotte Nickel is a multimedia navigator who grew up in Missoula. She earned a BA in Advocacy through Multimedia Production at Western Washington University, before working in media and marketing at Volunteers of America in California. She found what she enjoys most is collaborating with passionate people who want their stories told through the mode of video. Currently she is exploring identity, media, and memories in the UM’s Media Arts MFA program. Charlotte is excited to explore and help underline the creative and technical tools in filmmaking with the students at the Roxy Film Academy!

Laura Lovo is a documentary filmmaker from eastern Montana. She is a MFA candidate in the School of Media Arts and is currently an instructor for the non-linear editing class. Her focus is using multimedia to encourage and empower community members to tell their stories, create dialogue, and celebrate culture in all artistic forms. She graduated from the University of Montana in 2012 with a B.A. in Media Arts and a B.S. in Business Marketing. She has worked in media and marketing research for over 5 years.

Erin Esse is a Sonic Artist and a Sound Healer. She graduated from the University of Montana in 2014 with a BFA in Media Arts. She has worked on multiple films recording sound, acting, and working with the sound in post-production. As a vocal artist she loves writing, producing, and performing music and playing with unique sound. She is a big proponent of Deep Listening and taking time to connect with the subtle complexities of the world. Erin is hugely inspired by kids and loves sharing in learning with them.

Mike Steinberg is the Executive Director of the IWFF & The Roxy.  For ten years Steinberg was the director of Webster University Film Series, an internationally recognized, year-round film series which showcases the best in foreign, experimental, classic and American independent cinema.  He directed and programmed Big Sky Documentary Film Festival from 2008-2013. Steinberg has also worked with numerous film festivals as a programmer and consultant.  His own films have earned placement in national film festivals including AFI Docs (formerly SilverDOCS), The Independent Film Festival, Hardacre Film Festival, Big Muddy Film Festival, and St Louis International.  He has taught and lectured at University of Montana, Webster University, St. Louis Community College, the Center of Contemporary Arts and at the College of Languages in Lodz, Poland.