Montana Film Academy is excited to report that its arsenal of iPad filmmaking equipment was just utilized for a truly moving and deeply meaningful endeavor.  From January 9-14th, the iPads (and actress Lily Gladstone) hit the road with Yellow Bird Inc.’s 19th Annual Fort Robinson Outbreak Spiritual Run to conduct a digital storytelling workshop for participating youth from the Northern Cheyenne Reservation in SE Montana.

Across 400 miles, over 5 days, upwards of 70 youth from Northern Cheyenne and other tribal nations participated in this year’s relay run.  The run is held annually on the anniversary of the 1879 Cheyenne Outbreak from Fort Robinson, NE.  Therunners face the harsh winter conditions of the Northern Plains to commemorate and honor the sacrifices made by their ancestors, while also embracing the life that emerged from the tragedy of the outbreak. A true exercise in forgiveness and healing, this run transmutes the trauma of the outbreak into an act of celebrating love and life. 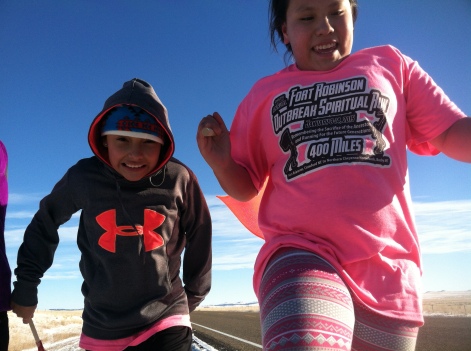 A bit about the history of the Fort Robinson Outbreak:

In the fall of 1878, after having been forcibly relocated to Indian Territory (what is now Kansas and Oklahoma), upwards of 300 Northern Cheyenne were led by Chiefs Dull Knife and Lone Wolf on a northern exodus to their traditional lands and rightful home in the Powder River country of Montana and Wyoming. Dull Knife and Lone Wolf parted ways along this journey. Those who followed Dull Knife eventually (and accidentally) were intercepted by Calvary soldiers during a white-out blizzard a just south of Chadron, NE and taken to Fort Robinson.

Dull Knife’s people were held in an Army barracks through the fall, and initially were allowed to come and go as long as they were present for evening role call.  During the months of November and December, Dull Knife and his people maintained they would rather die than be returned South – even petitioning to be relocated to Pine Ridge to live with Red Cloud’s band of Oglala Lakota.  In early January 1879, after being ordered to return south, Dull Knife’s people refused and were locked inside the barracks.  148 Cheyenne were imprisoned together in this new prison, about the size of a tennis court.  Food, water and firewood were withheld.

The children were told to scrape the frosted condensation from the windows, and to chew on strips of leather to ease their hunger.  On January 9th, at 9:45pm, the people broke out of the barracks.  The men fought back the soldiers with weapons they had hidden while the others ran.  On January 22nd, a group of 32 were intercepted 35 miles north of Fort Robinson, in a place referred to as the “Last Hole”, and were shot at point blank.  Their remains (some of which had been sent to the Smithsonian to research the effects of gunpowder fired at close range) were repatriated by the Northern Cheyenne in 1994, and laid to rest in Busby MT.

The run begins at the site of the reconstructed Army barracks, and ends 5 days later at the site in Busby.

On one night of the run, from approximately 9pm to 3am, the older and stronger runners make up mileage for the younger ones, who stay behind to swim and have fun at the hotel. It was here, at the AmericInn in Belle Fourche, SD that a small group of 10-12 year old girls decided to use their free time to form a production team, plan a project, gather footage, and cut together a trailer for a documentary film.

Thus LuLu Sisters Productions was born – lulu meaning the vocal outcry of support Cheyenne women practice to uplift and encourage others- this particular group of girls were very generous with their lulu’ing all along the run. Their subject, who the community loving refers to as Grandma Jenny (Jenny Seminole Parker), is the youngest daughter of a survivor of the outbreak. Grandma Jenny has gone along the run year after year, and serves as a constant source of support, encouragement, and good stories.  The girls formed their questions for Grandma Jenny, and took off with the iPads.

Here are two trailers for their forthcoming documentary (cut together by Nellie Whiteman and TeeTee Medicine Horse).

This site uses Akismet to reduce spam. Learn how your comment data is processed.